Continued from A Modern Fairytale – Part I 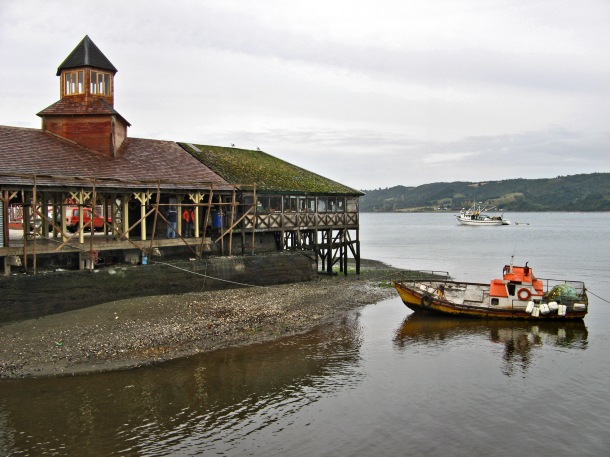 A fisherman’s boat pulls up to the harbour in Quicavi, Chiloe

I made it to Dalcahue in time for a hearty fisherman´s lunch. Once my belly was full, I noticed a small travel agency, and decided to enquire about the route. The three men behind the desk practically fell off their chairs when I asked for directions to the Cave. “¿Qué pasa?” I asked, but they just guffawed, pointed to a perfectly blank space on the map, and told me to follow the dirt track to Quicaví.

The landscape was perpetually transforming. I had never seen so many shades of green, such vibrant vegetation, such enormous leaves emerging from the ground, hanging off the trees, sprouting from the cliffs. Storms swirled around. If I wasn´t under a tempest, I was entering one, or driving out of one. The atmosphere was intense, nature was tangible; I was charged with energy. The road forked, and left with nothing more than the vacant space on our map, I was once again forced to ask for directions.

Stepping into a nearby café I received yet more smirks – and some peculiar instructions. The chuckling waiter explained that on arrival at the tiny fishing village of Quicaví I were to ask for the curiously named Fabián Mancilla, and he would be able to shed some light on the whereabouts of the wizard. Something was going on. But what?

Grateful for the powerful pickup truck, I navigated along the muddy lane, repeating the name “Fabián Mancilla…” He sounded like someone who would be acquainted with a wizard. The ever-wilder landscape seemed a more and more appropriate home for a mythological being. I were definitely getting closer.

The Trauco has the appearance of an extremely ugly man. He is short and carries a stone axe, which can fell any tree with just three blows. The Trauco is always searching for young maidens. When he finds an unaccompanied young woman, he will fell a tree in her path to take her by surprise, before breathing softly in her face which, despite the Trauco´s hideous appearance, will cause her to fall in love with him.

Unexpected pregnancies occurring outside of marriage are frequently attributed to the Trauco, which does not reflect badly on either the mother or the child; rather, they are believed to be protected as a result of this supernatural contact.

Rickety wooden houses on stilts emerged from the greenery – I was approaching Quicaví. Now I just had to locate Fabián. I pulled over to ask an old, hunched man with three teeth who himself could have been one of the island´s mystical creatures.

“Perdone, Señor… I am looking for the Wizard’s Cave…”

I was stunned as he cackled wildly at the mad gringos in the truck.

I finally realized I’d been had, and burst out laughing myself. Once in the village I asked for Fabián Mancilla, figuring that if I´d come this far I might as well discover what was at the end of this wild goose chase. As I repeated to him my tale he roared with laughter along with me, confirming that there was no cave, and I had indeed been set up by the whole island. It was perfect. I had stepped inside a Chilote fairytale all of my own.

The beautiful Pincoya watches over all who take to the seas. She emerges from the depths, draped in seaweed, to dance on the beach to an enchanting, mysterious song. When she dances facing the sea, say the fishermen of Chiloé, the fish will be abundant. But when she dances facing land, she knows the people have not respected the sea, and the fish will be scarce, forcing the fishermen to sail further out into the ocean.

Although most Chilotes cannot swim, they have learned not to be afraid of the water, as the Pincoya does all she can to help the victims of shipwrecks. If she is unable to save the sailors, she will tenderly transport them to the ghost ship Caleuche, where they will become part of the crew and be rewarded with eternal happiness.

Wrapping my coat and knitted scarf tightly around me, I skipped along the black sand of the beach and filled my pockets with enormous, colorful shells as a reminder of this enchanted day. Turning round one last time to say farewell to Quicaví, I stopped dead and gasped in wonder. An entire rainbow straddled one of the tiny neighboring islands. I gazed, stunned, and realized that though there may have been no Wizards´ Cave, there was indeed a rainbow at the end of this treasure hunt.

One thought on “A Modern Fairytale – Part II”