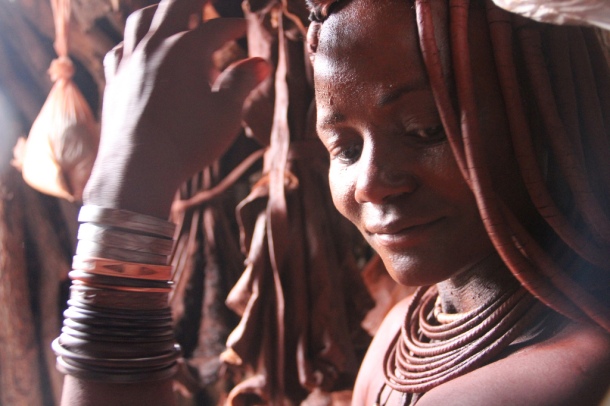 A Himba woman sits in her hut in Kunene, northwestern Namibia

I don’t know this woman’s name. I don’t know how old she is, or what she enjoys doing. But I do know that she is married and that she has two children. Her elaborate headpiece, made of goatskin and probably passed down through her family, tells me that she has a husband. And the chains of metal beads wrapped around her ankles tell me that she has given birth twice.

This woman belongs to the Himba tribe of the Kunene, an arid, rocky wasteland in northwestern Namibia. We drive for an hour and a half over boulders and through streams to reach the temporary settlement that her semi-nomadic community has moved to while they wait for the rains to arrive so that they can move back to their more permanent village. Her temporary hut is simple, hastily constructed from poles of wood and plastered earth, as red on the inside as the woman herself – though she may be here for many months.

Himba women don’t wash; they smear their skin with a paste of ground ochre, ash and animal fat, which deters insects and stains them a beautiful shade of red that western photographers go crazy for, and they never appear to age. Myrrh resin is burned and the smoke wafted over the body to act as a natural deodorant. The smells inside the tiny hut were strong but not unpleasant; natural but not human.

The woman’s hair, too, is covered with a thick ochre paste – she allowed us to touch a strand, shyly. Aside from her plentiful jewellery, crafted from leather and metal, she wears only a goatskin skirt, smeared ochre red over time. Her bare feet walk the ground covered in rocks and goat droppings, and soon she will pick up her few belongings – calabash gourds for the milk, a bag of cornmeal or sugar – and her children, and begin the long walk back to her summer village. 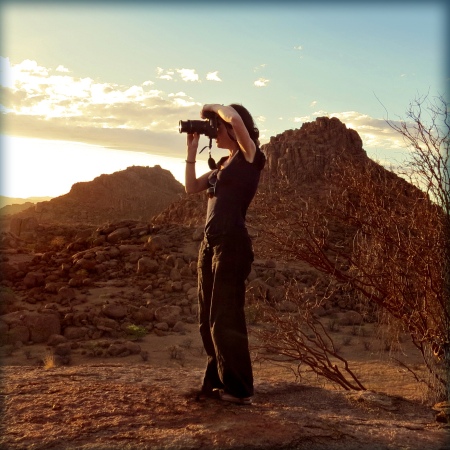