2017 is the UN’s Year of Sustainable Tourism for Development, and today, 27th September, is World Tourism Day. It’s inspired me to look back over the year so far, and reflect on some of my top sustainable tourism encounters and achievements, working with animals, companies and NGOs from across the globe.

My report on female entrepreneurs in tourism, published by Responsible Travel. Photo by Ecocircuitos Panama

Towards the end of last year, I was invited to speak to a group of female entrepreneurs from across Asia and Africa about communicating responsible tourism. The women had all founded tourism businesses and were in London as part of the ITC’s SheTrades initiative. A few months later, for International Women’s Day, I interviewed one of the women – Ethiopian Samrawit Moges – along with Annie Young from Panama and Manisha Pande and Ridhi Patel, both from India – to create a report on female entrepreneurs in tourism. Their experiences as women, as business owners, and as citizens of developing nations, was both shocking and inspiring. Some of the challenges they had encountered while trying to open bank accounts, rent cars or simply meet clients (without being mistaken for prostitutes) were humbling. Ultimately, all had used their success for the greater good, and were inspiring a new generation of girls and women to continue with their studies and aspire to rewarding careers.

My interview in Finland’s Lapin Kansa newspaper – and a pic of me meeting hyperactive huskies!

A few days before the summer solstice I headed to the Arctic Circle in Finland to meet husky and reindeer farmers. I was joining researchers from the University of Lapland to talk about animal welfare in tourism, and how the husky farmers could continue to run small, sustainable tourism businesses as demand increased rapidly. Lapland’s biggest draw is its wilderness areas: pristine forests, glassy lakes, lack of human influence, and – a word that kept recurring – silence. The Finns valued it, the tourists valued it – but the growth in tourism threatened it. It threatened the welfare of animals, too; husky and reindeer safaris are key to Lapland’s tourist industry, but pressure was being put on small, family-run farms to acquire more and animals to satisfy demand during the short, snowy season. An increase in tourists from China, in particular, put pressure on these businesses as the Chinese tend to travel in very large groups. I spoke about spreading demand throughout the year, with husky walks through the forest not just sledding, and raising prices to increase income while keeping numbers low. Positive feedback from the seminar, the researchers and a subsequent interview in Lapland’s Lapin Kansa newspaper made me feel more confident that there were plenty of engaged people working to address these issues, to protect the silence, the wilderness – and the huskies. 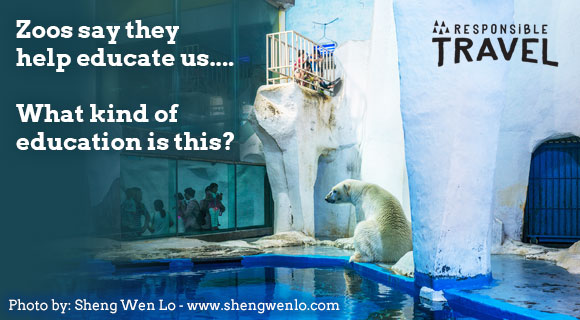 One of my biggest, ongoing tasks at work this year has been to review all the captive animal facilities featured on Responsible Travel, and to help develop a new policy on captive wildlife facilities. All zoos were removed from the site, as well as a few wildlife attractions which sounded ethical – but on inspection, were more focused on tourists than the animals themselves. There will, sadly, always be a need for genuine sanctuaries and rescue facilities, and while rehabilitation and re-release into the wild is the most desirable outcome, in the case of injured, orphaned or habituated creatures, it is not always possible. By removing the attractions which we did not deem to be fully ethical, we are more able to highlight the fantastic work being done by genuine rescue centres – such as Sepilok Orangutan Rehabilitation Centre in Borneo, Ziwa Rhino Sanctuary in Uganda and the giant tortoise breeding centres in the Galapagos Islands.

My report on LGBT travel in South Africa. Photo by Niko Knigge

Responsible tourism is not just about the tourism industry; it’s about having an inclusive attitude towards all travellers, too. I have been working on a series of reports on LGBT travel, with the first three articles covering South Africa, Japan and – controversially – Uganda. This was a completely new subject for me, and one I was initially uncomfortable covering as a non-LGBT traveller. However, the research was fascinating, and revealed far more about each nation’s history and cultural psyche than I had imagined. In South Africa, for example, the post-Apartheid anti-discrimination laws were some of the most progressive in the world, covering everything from gender and race to sexual orientation. However, what is enshrined in law does not always play out in the streets: and just as racism persists, so too does homophobic violence. Japan is the opposite – with little legal recognition for same sex couples. However, LGBT people here are unlikely to face any discrimination on the street – and there is a thriving gay scene. Uganda is a whole other story, of course, and the article makes for some particularly unsettling reading.

Onboard Tahita in Greece’s Small Cyclades

It wasn’t all work – there was a fair bit of play too, as you would hope from a travel writer! Some of the most fun moments took place on Tahita, Annie and Sotiris’s sailing boat around Greek’s Small Cyclades islands, as I played Aegean castaway for a week. Their travel company, Mystic Blue, has some very impressive responsible tourism credentials, and sustainability feeds into every aspect of their trips – which actually means they are even more fun. The itineraries shun the tourist hotpots such as Mykonos and Santorini, focusing instead on tiny villages and local tavernas, supporting local businesses and encouraging residents to remain in these communities rather than migrating to the towns and cities in search of work. We bought supplies from local producers, sailed when we could rather than using the motor, held onto all our plastic waste until it could be taking to a recycling centre, and picked up rubbish from the sea as we scuba dived around caves and wrecks. Even the purchase of the boat itself was an environmental decision – at a time when many people were focused on having as new a boat as possible, they bought an older boat and polished it up – believing that scrapping a boat after five years was completely unethical. I agree. Yiamas, Annie and Sotiris!