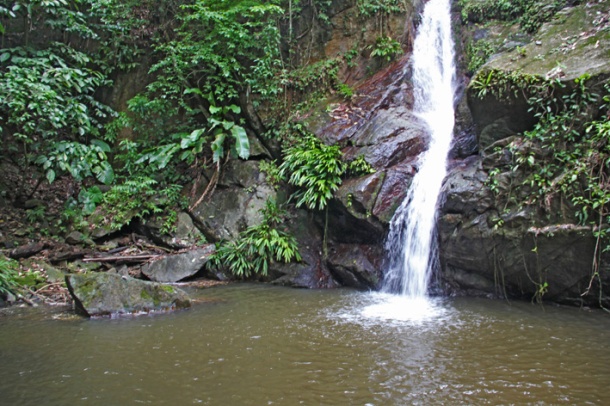 On an island as tiny as Tobago, it’s doubly thrilling to discover that the road less travelled still remains. In this case the “road” was a river, and I was navigating it not by boat, but on foot – barefoot – with a man named Porridge.

We were heading to Castara Waterfall, one of many which emerge from Tobago’s ancient rainforest, cascading down steep hillsides into the Caribbean Sea. Though the main falls are just a short stroll from the fishing village of Castara, I’d heard on the island grapevine whispers of a second and third waterfall, deep in the jungle, beyond abandoned cocoa plantations, the snapping claws of rain crabs, and sheer walls of pure nature.

Porridge – as he is known, island-wide – had grown up in Castara, and now manages Castara Retreats. He’d lost many enchanted hours playing in the forest, back when the waterfall was Castara’s only freshwater source. But it was years now since he’d ventured beyond the first falls, and when I mentioned the third cascade, his eyes sparkled.

So here we were, having scrambled up slippery rocks beside the first waterfall, and emerged from the tropical sunlight into a dark, jungle-smothered landscape, where hummingbirds’ coppery hues contrasted with the leaf-filtered light. Our sandals stowed, we proceeded, slowly, via rock and river. The ankle-deep freshwater was pleasingly cool. My pace was urban-clumsy, but Porridge was patient, carrying my bag, my camera and – once – me across the trickiest terrains. He identified thorny bushes and stinging shrubs – though as jungles go, Tobago’s is a treat, with no venomous snakes, no jaguars or piranhas. The greatest danger was the wet rock, polished perilously smooth by the pounding water.

With so much focus on my bare feet, I had to remember to look around – at the orchid-draped trees, and the flashes of motmot and kingfisher – feathered fireworks in the forest twilight. An hour in, we reached the third and final cascade.

Far offshore, Tobago’s popular Nylon Pool is hailed as its Fountain of Youth; bathing in it, the legend says, takes ten years off you. But as I slipped into Castara’s still-secret pool – mud-streaked, graze-kneed, and giggling with the giddiness of raw nature, I felt I’d skipped more than a decade. I’d returned to the magic of childhood.