These stories were told at Uganda’s Ndere Cultural Centre, in a leafy district of Kampala. I went to a cultural evening there after having lived in the country for six weeks, and the stories summed up my experiences – of making friends, working, travelling, my daily Ugandan life – rather beautifully. They were told by the centre’s wonderful host, Steven, who deserves all the credit for this post. It was this night, at the end of my stay, that finally tipped me over the edge and made me fall in love with Uganda.

Steven opened his story with the announcement that Uganda has no external debt, and received a cheer from the audience sat around the stage on a cool East African evening.
“Do you know why?” he asked, and proceeded, at a leisurely pace, and with an enormous smile, to tell us this tale…

Once upon a time, not so long ago, Uganda was drowning in foreign debt, and a representative of the World Bank was dispatched to Kampala to see what was to be done.
He met with Ugandan officials and explained the problem.
“Your country is seriously in debt, and we must find a way for you to pay it back. I wish to investigate all the possible means you have to generate income.”
The officials nodded, unconvinced.
“So,” said the representative, “what is trade like here? Can you tell me about the Ugandan market?”
“Ah yes,” exclaimed the official, suddenly springing to life, “we have a big market here. A very big market. It’s called Owino.”
The representative brightened – here was the first step to debt recovery. He headed to the centre of the capital, and found his way to Owino. It was a big market indeed – one of the largest in East Africa, in fact, with over 500,000 vendors crammed under tattered tarpaulin sheeting, selling their wares – second-hand clothes; scuffed shoes newly polished; Congolese batiks and baskets piled high with vivid dyes and spices that made the representative sneeze.
He frowned: this was not exactly what he had in mind, but surely something could be done.

He found a young woman sat on the floor, a huge branch of delicious-looking small bananas on either side of her.
“Excuse me Madame, could you tell me how much a bunch of bananas is?”
The woman noticed his pale mzungu skin and calculated accordingly.
“That will be 9,000 shillings, Ssebo” she replied.
Gosh, what a bargain, thought the representative.
“Splendid!” he beamed. “I’ll take two!”
The woman looked confused.
“No, Ssebo, they are 9,000 each.”
“Yes, and I would like to buy them both!”
The woman’s mounting concern began to show upon her face.
“Ssebo, you do not understand. I can only sell you one bunch.”
“But Madame, why?”
“Because if I sell you both bunches today, what will I sell here tomorrow?” 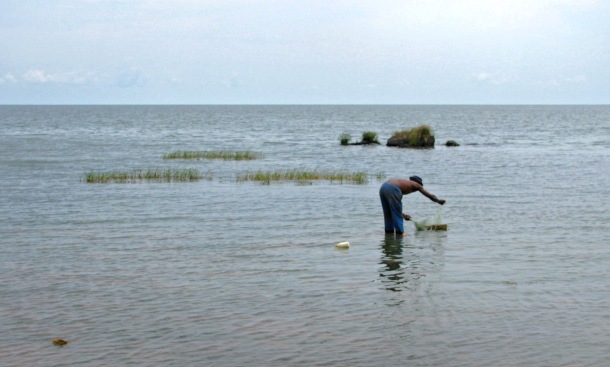 A fisherman casts his net in Lake Victoria, Uganda