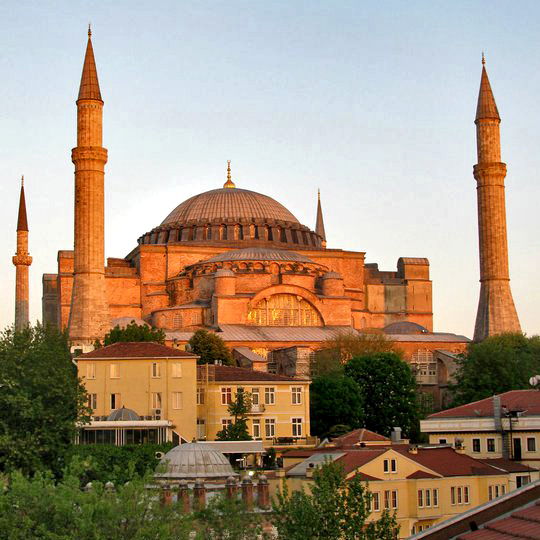 The Hagia Sophia viewed at sunset from a hostel rooftop room in Istanbul, Turkey, 2011

This week’s Friday photo is a shout out to Turkey, as it finds itself at a cultural and political crossroads.

This majestic building is Hagia Sophia in Istanbul, made even more beautiful by the fiery glow of sunset. The history of Hagia Sophia seems significant right now, as it has weathered the different cultures, religions and governments that have ruled this country. Even its names tell stories of its multicultural past – Hagia Sophia is Greek, while Aya Sofya is Turkish – and the city where it stands straddles two continents.

Originally built in 360AD, the Eastern Orthodox “Great Church” was burned down during riots, then rebuilt, then razed again. The current structure was inaugurated in 537AD, and survived further fires, a couple of earthquakes and a brief conversion to Roman Catholicism. Nine centuries after its construction, Hagia Sophia became a mosque under Ottoman rule, and remained so for a further 500 years.

Hagia Sophia was secularised in 1935, along with the rest of the nation, when Mustafa Kemal Atatürk came to power. Recognising the building’s historical significance, he transformed the mosque into a museum, and though it is open to all, worshipping of any kind is still forbidden there. Visitors today pay their respects only to the architecture, the works of art and the elaborate decorations; the mosaics of the Virgin and Child surrounded by gold-leaf Islamic calligraphy.

I was warmly welcomed in Turkey, and found much to love about the country. Like Hagia Sophia, I hope its citizens and government can overcome the current tremors and flames, celebrate their wonderful differences, and stand proud of their rich history and nation again.