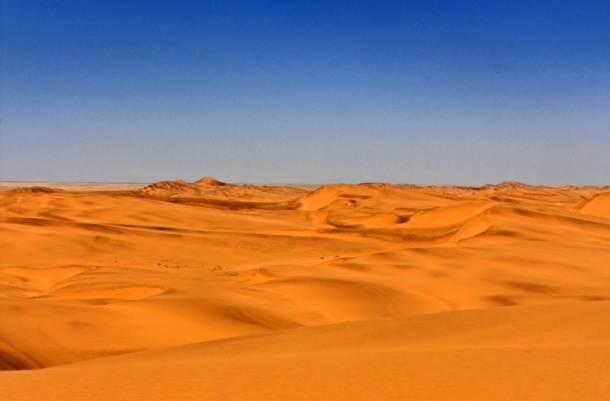 Namibia is described as the “Land of the Brave“, but that was not how I felt as I lay on my belly on a thin piece of hardboard on the edge of a sheer, 100 metre high cliff of sand. I was about to experience what it felt to whizz down this shifting slope face-first, at a speed of up to 80 kilometres an hour – during which one misplaced foot or elbow would mean flipping violently into the air and, presumably, eating an awful lot of sand.

I was in Swakopmund – Namibia’s adventure sports capital – and from where I was lying, it was certainly living up to its reputation. “Swakop”, as it is known locally, is a small town located halfway down Namibia’s fog-clad coastline, four and a half hours by car or bus from the capital, Windhoek. Sandwiched between undulating dunes and the southern Atlantic ocean, Swakop’s German architecture, fresh ocean breeze and perpetual, chilly mist make it a favoured retreat for locals and tourists in a country comprised mostly of desert, rocks and searing, southern African heat.

I have always shied away from anything that could loosely be described as “adventure sports”. So when I was sent to Swakop to research that very subject, I planned to do so vicariously: interviewing a daring paraglider, photographing quad bikers and reading brochures about skydiving over the desert. I contacted a sandboarding instructor first of all, choosing the only company that described itself as being owned by a “local”.

And indeed Pally was a local – dreadlocked with a wide smile, he picked me up from my hotel and explained how he was from the nearby township of Mondesa. His first time on a board was 2005, during his final year of school.

“I remember I was so nervous because I though I was going so fast!” he laughs. Watching him whizzing down the dune, switching direction, barely wobbling, he doesn’t seem like someone who is afraid of speed.

Pally’s passion grew, and he started Ultimate Sandboarding two years ago. Bursting with motivation and enthusiasm but lacking capital, he Googled famous sandboarders and snowboarders and contacted them to explain his predicament – a young man from an African township, looking to start a business – and asked them for their old or unused snowboards. His boldness paid off; he now has 15 boards and 13 pairs of boots, along with a steady income and a job which allows him, in his own words, “to be free”.

“What size shoes do you take?” Pally asked as we approached the dunes south of Swakopmund.

“I have the boots with me – I need to check which size.”

“No, no, there‘s been a misunderstanding – I’m just here to take pictures of other boarders,” I laughed.

But Pally was having none of it. How could I describe an activity I hadn’t done? He had a point.

I strapped on an enormous pair of moonboots that were at least two sizes too big, put on a helmet, picked up a heavy board and began to trudge up the dune. My feet skidded around in my oversized boots; which in turn slipped back down in the loose sand with every step. I was wheezing.

“Follow my steps!” called Pally, skipping up the dune as lightly as a springbok. “It’s easer!”

I aimed my boots into his footprints, and found the sand slipped a little less. Exhausted, I reached the crest, and saw a sandy expanse rolling out in front of me, dune after endless dune, while behind me the sand spilled into the ocean.

Strapping my boots to the board,  Pally, reiterated his instructions. “Trust me! Trust me!” he repeated endlessly. He gave a little push… and I wobbled down the slope… without falling over. This was great. I was sandboarding!

We moved on to a bigger dune. Strap in, bend knees, arms out. Pally let go, and I was off, picking up speed on the smooth sand. The board moved faster and faster, but I forced myself to concentrate on my balance, which stopped me focusing on my fear. I bent my knees more, willed myself to balance… and then the dune levelled out and I slowed to a halt. I screamed and cheered, and would have jumped up and down had I not still been bound to my trusty board.

After a few more seamless runs, Pally presented me with my next challenge – the piece of hardboard.

I looked at him blankly.

“You lie on it, with the smooth side on the sand, and go down the dune.” Pally explained.

Well, having become a sandboarding master after just an hour, how hard could that be?

And that is how I found myself lying on top of the highest dune yet, looking into the abyss, face down, knuckles whitened, knees bent, mind racing for excuse that would possibly get me out of this.

“DO NOT lower the corners. If you drop the front of the board it will dig into the sand and flip you – remember you will be going at 80 kilometres an hour!”

Yes, somehow I had managed to remember that fact. Though I was a long way from going supersonic, I suddenly had a moment of empathy for Felix Baumgartner. I peered down the vertical cliff again. This was not looking good.

“If you feel yourself turning, tap your toes – it will keep you straight.”

Pally let go of the board. I gripped the edge for dear life, tapping my toes once for stability. The sand rushed past me, I was going so fast I had no idea what was happening. Fists clenched, I tensed my knees. I reached the bottom, but had picked up so much speed I was halfway across the valley floor before realizing I needed to use my feet as a brake. Finally coming to a halt, I slumped down onto my board, utterly relieved, adrenaline still pumping through my veins.